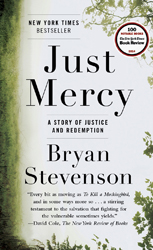 Selected from three titles nominated by the Common Reading Selection Committee, Bernardo said this book “addresses the important social issue of criminal justice and its interaction with racial discrimination in our country.

Bernardo also commented that he found the book to be “well written and authored by someone who will certainly continue to be a relevant figure in the social justice space for years to come.”

Published in October 2014 by Spiegel & Grau, an imprint of Random House, the book is nonfiction and written in first person by Bryan Stevenson. He is an attorney who, the book jacket says, has “won relief for dozens of condemned prisoners, argued five times before the U.S. Supreme Court, and won national acclaim for his work challenging bias against the poor and people of color.” He has argued cases to keep children out of adult jails and prisons. Many of his cases are profiled in Just Mercy.

He is also the founder and executive director of the Equal Justice Initiative in Montgomery, Ala., and a professor of law at New York University School of Law. Author John Grisham likens Stevenson to Atticus Finch, the heroic fictional lawyer in Harper Lee’s To Kill a Mockingbird classic American novel, describing Finch as “a fearless and committed lawyer (who) made such a difference in the American South.” Interestingly, one of the central cases profiled in the book concerns the fate of an African American defendant unjustly accused of murder in the same town where Harper Lee’s novel is set and celebrated.

New York Times op-ed columnist Nicholas Kristof wrote that “Bryan Stevenson may, indeed, be America’s [Nelson] Mandela….Injustice is easy not to notice when it affects people different from ourselves; that helps explain the obliviousness of our own generation to inequity today. We need to wake up. And that is why we need a Mandela in this country.”

Stevenson calls for compassion in the pursuit of justice.

“My work with the poor and the incarcerated has persuaded me that the opposite of poverty is not wealth… [it] is justice,” he writes in the introduction to his book.

“We are all implicated when we allow other people to be mistreated. An absence of compassion can corrupt the decency of a community….I believe it’s necessary to recognize that we all need mercy, we all need justice, and —perhaps—we all need some measure of unmerited grace.”

Selected from top three of 25 nominations

A total of 25 books were nominated in October and November by the WSU community to be the next common reading. Members of the selection committee, chaired by Susan Poch, co-director of the Common Reading Program, read and discussed all of them. They settled on three finalists which Poch sent to the provost for his decision.

The titles of the other finalists are Salt, Fat, Sugar: How the Food Giants Hooked Us, by Michael Moss, and Ready Player One, by Ernest Cline. The complete list of nominations is on the Common Reading website.

Used in classrooms and beyond

Just Mercy will be the ninth book in as many years that first-year students will use in classes across all disciplines to inspire academic discussions with professors and peers. Two semesters of robust programming will enhance topics from the book and will include faculty and guest expert lectures, film showings, activities with campus partners.

“I hope Just Mercy serves as a constructive and motivating book for the multitude of classes which employ it during the freshman experience,” Bernardo said.

Limited desk copies may be available

Poch’s co-director, Karen Weathermon, anticipates that examination copies of the book will be available by the end of the semester for faculty who want to consider use of Just Mercy in their classes or programs for next year. More information on how to request a copy will be announced shortly.