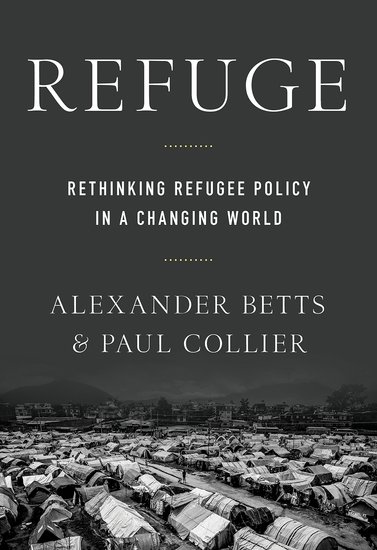 Refuge will be used at the Pullman, Tri-Cities, Spokane, and Global campuses. Published in 2017 by Oxford University Press, it co-authored by Oxford alumni and professors, Alexander Betts, 39, a political scientist, and Sir Paul Collier, 70, a development economist.

Daniel J. Bernardo, provost and executive vice president, followed tradition and made the final decision from three choices sent to him by a selection committee made up of faculty, staff, and students.

“I felt the topic of this book was very important and one that every student at WSU should have the opportunity to grapple with,” wrote Bernardo to Weathermon, referring to the widespread usage of common books in classes, events, and programming throughout an academic year.

“The book’s authors did an admirable job of presenting the topic in an objective manner and laying out the tremendous complexities and similarities of current (refugee) crises across the globe. By looking at the root of crises in Europe, Africa, and the Middle East, perhaps our students can gain a perspective of the challenges in our own country without the polarizing politics that accompany almost every discussion of the situation.”

Weathermon identified the two other books sent to the provost were Scarcity: The New Science of Having Less and How It Defines Our Lives, by Sendhil Mullainathan and Eldar Shafir published in 2013, and Tell Me How It Ends: An Essay in Forty Questions, by Valeria Luiselli in 2017.

Refuge is the thirteenth common book used in the same number of years by the Common Reading Program.

Common readings, said Weathermon, are designed to help build an academic community of students, teachers, librarians, residence-hall staff, and others. Topics from the shared reading lead to scholarly discussions in classes and beyond, and to special lectures and programming outside of classes.

Through these experiences, Weathermon said, common readings introduce students to the power and diversity of ideas, the value of research, and the various but interconnected ways in which disciplines across the university approach similar, complex problems.

Books selected as common reading also align with designated two-year themes. Refuge is the first under the theme of “global stability, scarcity, and security.”

Human development instructor Caitlin Bletscher nominated Refuge, having for years used topics from common books in her classes. Regarding the use of Refuge at WSU, she reasoned that “international migration spans across disciplines…its social, economic, and political implications provide significant insight and influence across fields.

“Current WSU research in the fields of history, agriculture, economics, and human development provide (vision) into issues of international migration…and the valuable contribution of migration to local, regional, national, and international communities.”

Weathermon agreed and said she believes that experts across the university can lend research and experience into conversations sparked by the book.

There are more than 65 million uprooted and displaced persons worldwide, with 20 million of those having crossed national borders to qualify as refugees in another country, according to the book. Refugees typically leave their home nation to seek safety and, then, the chance to build new lives; however, in recent times, many refugees are spending decades in makeshift housing camps with few opportunities to better their lives or reach goals.

Solutions offered by national and international communities, according to the Refuge authors, must go beyond the provision of essentials such as food and shelter. There must be plans and actions to reintegrate the refugees into society with jobs and the means to help themselves thrive, the authors maintain.

Refuge co-author Betts and Collier met for the first time as invitees to a Jordanian conference to brainstorm the “broken global refugee system.” What resulted led to the pair to be credited with “proposing one of the most important economic experiments in the world today—a new approach to refugee assistance based on development rather than just humanitarianism,” as described by online News Deeply.

Weathermon said that an announcement about how to request a desk copy of Refuge will be publicized in the near future. Faculty considering use of the book in classes can ask for a copy at that time.